About Gann's Amazing Trading: 264 Winners out of 286 Trades & How Gann Methods Can Make You Big Trader Profits especially if combined with Time Cycles

Today is which is a good time to visit the traders website of The Cycles Foundation Organization our cycles trading and Gann trading information research site, please visit again. We also suggest you pay a visit to Price Quotes.

To make a success investing in stocks or speculating by trading in commodities you must have a well defined plan and must know the rules that have stood the test of time for 50-years or more. After you learn the trading rules you must eliminate guess work, hope and fear and follow trader rules and you will make profits.

There's a 100% chance of getting a free stock when you sign-up and link your bank account, a surprise stock appears in your account. You don't need any money in your account to get stock free. Click-Here to get Free Stock and Trade Crypro Markets like Dogecoin and other Cryptos or Stocks Free!

When you buy a trading course of instructions, look up the record of the man who has discovered and developed it and if he has made a success with it and made money, you can afford to buy the course and follow the rules.

1907, he predicted the panic in stocks and the decline in commodities and made large profits.

1909 December, the Ticker magazine (now the Magazine of Wall Street) printed an article titled "remarkable predictions and trading record." The article was written by the late R.D. Wyckoff, owner and editor of the Ticker Magazine at that time.

The following is a copy of part of the article:

"In order to substantiate Mr. Gann's claims as to what he has been able to do under this method, we called upon Mr. William E. Gilley, an inspector of imports.

Mr. Gilley is well known in the downtown district. He himself has studied stock market movements for 25-years, during which time he has examined every piece of market literature that has been issued and procurable in Wall Street.

When asked what had been the most impressive of Mr. Gann's work and predictions, he replied as follows:

"It is very difficult for me to remember all the predictions and operations of Mr. Gann which may be classed as phenomenal, but here are a few:

Predictions Made On Scientific and Mathematical Formulas and Calculations, Time Cycles and 'Natural Law'
Mr. Gilley encouraged Mr. Gann to study out the scientific and mathematical possibilities of the subject. "Mr. Gann's calculations are based on natural law. I have followed his work closely for years. I know that he has a firm grasp of the basic principles which govern stock market movements, and I do not believe any other man on earth can duplicate the idea or his method at the present time."

Trading the financial markets using Gann methodology can work well when trading forex and other futures markets, including the stock market. Here are some (but not all) the key subjects covered in our recommended Gann Techniques Trading Course, which can effectively be used to trade stocks, forex or commodities using the truly amazing W. D. Gann methods. 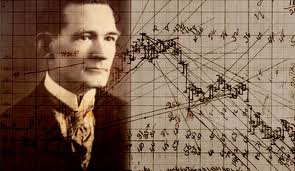 In this Gann Course we address issues such as: Did Mr. Gann use Astrology in his Trading (the answer may surprise you); Square Chart Definition and Usage; Squaring Price and Time; Geometric Angles; Which Gann Angle is most important (answer about why it's so powerful is easy to comprehend); Angle Concepts; Gaps on Charts; What Causes Chart Gaps; The Gann Square of Nine and other powerful Gann trading methodologies, plus more details about How To Square Price and Time.

Gann Predicted Exact Day of High Months in Advance
"Early this year (1909) Mr. Gann figured the top of the advance would be on a date in August and calculated the price of the Dow-Jones Average would be at. The market culminated on that exact day and within 4/10th of 1-percent of predicted price."

"You and Mr W.D. Gann must have cleaned up considerable money on all these operations," was suggested. "Yes, we have made a great deal of money. He has taken half a million dollars out of the market in the past few years. I once saw him take $130, and in less than one month ran it up to over $12,000. He can compound money faster than any man I ever met."

Wheat Closes At Exact High Price Predicted One of the most astonishing calculations made by Mr. Gann was during last summer (1909) when he predicted that September wheat would sell at $1.20. This meant that it must touch that figure before the end of the month of September.

At 12:00 Noon, Chicago time, on 9-30-09 (the last trading day) the option was selling below $1.08 and it looked as though his prediction would not be fulfilled. Mr. Gann, said "If it does not touch $1.20 by the close of the market it will prove that there is something wrong with my whole method of calculation. I do not care what the price is now, it must go there."

It is common history the September Wheat contract surprised the whole country by selling at $1.20, and no higher, in the very last hour of trading, closing at that exact figure. So much for what Mr. Gann has said and done as evidenced by himself and others. Now as to what demonstrations have taken place before our representative:

An Amazing 264 Winners out of 286 Trades
During the month of October, 1909, in 25 market days, Gann made in our representatives presence, 286 transactions in various stocks, on both the long and short side of the market. 264 of these transactions resulted in profits; 22 in losses.

The capital with which he operated was doubled 10 times, so that at the end of the month he had 1000% on his original margin. In our presence Mr. Gann sold US Steel common short at 94-7/8, saying that it would not go to 95, it did not.

We have seen him give in one day, 16 successive orders in the same stock, eight of which turned out to be at either the top or the bottom eighth of that particular swing. The above we can positively verify.

92% Winning Trades
Such performances as these, coupled with the foregoing, are probably unparalleled in the history of the Street. James R. Keene has said, "The man who is right six times out of ten will make his fortune." Here is a trader, who without any attempt to make a showing (for he did not know the results were to be published), establishes a record of over 92% profitable trades.

Mr. Gann has refused to disclose his method at any price, but to those scientifically inclined he has unquestionably added to the stock of Wall Street knowledge and pointed out infinite possibilities.

Mr. Gann was born in Lufkin, Texas, and is 31-years of age. He is a gifted mathematician, has an extraordinary memory for figures, and is an expert Tape Reader. Take away his science and he would beat the market on his intuitive tape reading alone.

Endowed as he is with such qualities, we have no hesitation in predicting that within a few years William D. Gann will receive full recognition as one of Wall Street's leading operators." No doubt Mr. W.D. Gann will easily qualify to be in the top ranks of the trading experts in Whos-Who On Wall-Street

Editor's Note, Keep in mind the trade profits and prices (and above quote) was from over 100-years ago (1908-1909). Can you imagine how much money would be involved based on modern day prices!

We respectfully request a small one-time only monetary donation to help contribute to supporting Cycles and the Cycles Foundation including the Cycles Analyst which is working on developing cycles-trading software (in combination with Gann techniques). We are asking for financial-backing from finance related investors contribute funds for new cycles-based trading software research and development for the financial market; forex futures traders, stock market traders, options traders and all technical traders. Contributions may be merged to also help other causes, including health and wellness non-profit work. Free Traders Club Membership included with a minimum contribution of $25 plus a no-obligation reservation to buy our new trading system upon release.