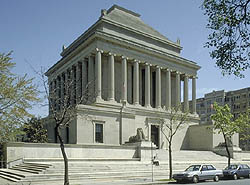 Scottish Rite Temple is one of the most unusual buildings in the eclectic Sixteenth Street Historic District. The Temple of the Scottish Rite is located at 1733 16th Street. The building, designed by John Russell Pope who also designed the National Archives and the Jefferson Memorial, was constructed between 1911 and 1915. It was built to headquarter the Supreme Council of the Southern Jurisdiction of the 33rd Degree of the Ancient and Accepted Rite of Freemasonry.

An international fraternal order, the Free Masons have claimed a number of well-known past Presidents, such as George Washington and Harry Truman, as members. Pope used the tomb of King Mausolus at Halicarnassus, one of the seven wonders of the ancient world, as his model for the Temple.

Outside, guarding the temple doors, is a pair of monumental sphinxes that represent wisdom and power. The Temple is laced with symbolism in its design and decor, much of which requires close attention and may not be obvious to non-Masons.

In 1931, the building was voted the fifth most beautiful building in the world by a group of members from the Association of American Architects.

The library, the first public library in the District of Columbia, contains one of the world's largest collections of materials on and by Scottish poet Robert Burns, who was a Freemason. The Library was opened to the public at the request of Albert Pike who donated his personal collection of books with the stipulation that they be available for use, free of charge, by the general public.

One of the most striking monuments in the nation's capital, the imaginative facade of the Temple creates a visual experience worth viewing.

The Scottish Rite Temple is located at 1733 16th St, NW, between R and S Streets. Tours are offered on weekdays from 8:00 am to 2:00 pm. Appointments must be made to peruse the library's collections. For further information, please call 202-232-3579. Metro stop: Dupont Circle