Trading Discipline -- A Featured Traders Article of the Month

The FTSE pushed higher today, approaching the high at 5435 from May 14. Thursday’s session high at 5416 is important, as it finally proved that the bulls could break the ten-day congestion on the daily chart in order to create a higher high intraday. However, this bullishness should be tempered by the fact that prices pushed lower and drove the FTSE to a close at 5365. This price action also confirmed the Ascending Triangle pattern’s uptrend line support at 5367 (A) on the 60-minute time frame.

The 60-minute chart indicates a weak uptrend, which is confirmed not only by the six-bar Autochartist Initial Trend reading but also by the uptrend line bounce. Triangle patterns are congestion-to-consolidation patterns that form within a sideways market cycle. This pattern, with its strong uptrend line support, can be traded with a trend-following set-up—the Autochartist Retracement/Correction (ARC) entry. This entry relies on support holding when the uptrend pulls back. Look for more upside continuation leading to exhaustion at the Triangle’s top line at 5420. 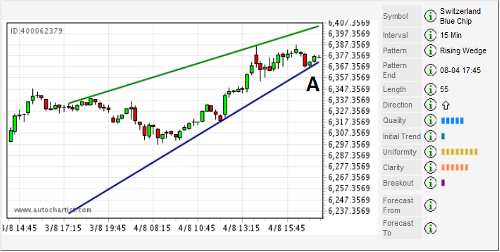