Using Options to Capitalize on Strong Fundamentals in Gold

Looking back to September of 2011, gold's all time high came in around $1,923 per ounce. In a little more than 2 years, gold prices have dropped around $700 per ounce representing a total loss of more than 36% based on the 12/02/13 closing price. I would say most analysts would agree that gold has been in a bear market over the past two years.

Before we begin looking at a few ways to use GLD option structures to take advantage of higher future prices in the yellow metal, I thought I would focus readers' attention on some bullish fundamental data for gold. Let us begin with a chart of the Federal Reserve's Total Assets which is shown below. 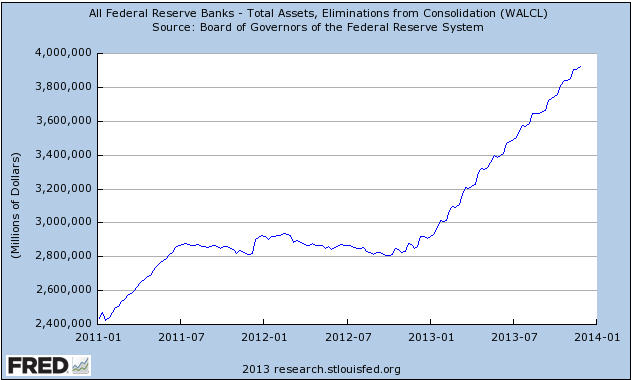 The data shown above comes directly from the Federal Reserve's public database itself.

Interestingly enough, the chart above illustrates the amount of money the Federal Reserve has been printing since the beginning of 2011. The chart below illustrates the price of gold futures during the same period.

Gold futures have moved lower in price while the Federal Reserve has printed an unprecedented amount of money through the quantitative easing program. It has been pointed out that the flow of liquidity is more important than the total money stock, but these two charts when viewed together are rather odd at the very least. However, we must all continue to remind ourselves that there is no manipulation of any kind going on . . .

Another odd situation has developed regarding the gold miners and the price of gold relative to production costs. The gold spot price has essentially moved down below the average 2013 cash cost of $1,250 - $1,300 per ounce. Price action in gold futures is rapidly approaching the marginal cost to produce gold which is around $1,125. The chart of the various gold production costs is shown below. 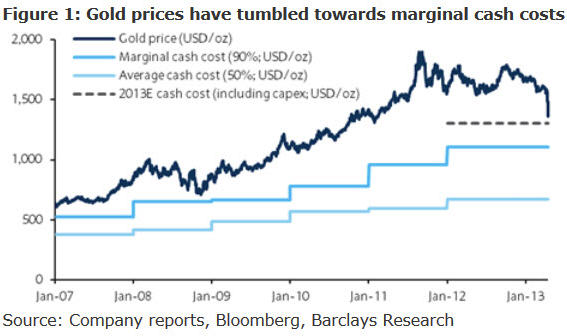 Gold prices closed on 12/02/2013 at $1,218 per ounce. Based on the closing price, gold futures are less than $100 per ounce away from the marginal cost to produce gold. If the yellow metal's price moves below the cash and marginal cost of production gold mining volumes worldwide will begin to decline.

The gold miners have likely already started lowering their production levels at current prices. The production slow down would only accelerate should prices move down below the marginal cost of production. I believe that these production costs will help put a floor underneath gold prices in the longer-term.

It is widely known that there is strong current demand for physical gold coming from Russia, India, and China. If the gold miners began to slow production levels considerably it is likely that physical gold prices could explode to the upside.

As many readers know, my primary focus as a trader is in the world of options where I focus primarily on implied volatility and probabilities to formulate new positions.

Unfortunately options on gold futures are fairly limited and are not actively traded.

However, the options on the gold ETF GLD are very liquid.

With the longer term fundamentals intact, I thought I would post a few possible trading ideas using GLD options to get long GLD while giving the trader some duration to allow for the time needed for the trade to work.

A fairly cheap way to construct a longer-term bullish position in GLD would be to look at a June 2014 Call Debit Spread or a June 2014 Broken-Wing Call Butterfly Spread.

These trade structures use multi-legged constructions and would essentially allow traders to get long GLD.

Due to the inherent leverage built into options, these positions would not require near as much capital as buying an equity stake in GLD or being long gold futures. The trade structures mentioned above would also mitigate Theta risk, also known as time decay so the passage of time would not have a significant impact on the trade's overall profitability.

In fact, both of these trade structures would actually benefit from the passage of time in terms of profitability down the road. There are a variety of other trade structures that could be used to benefit from higher prices in GLD while simultaneously capitalizing on the passage of time as a profitability engine. Each trade construction carries a variety of different potential risks as well as required capital outlay or margin encumbrance.

I want to be clear in stating that these trade structures are purely for educational purposes and should not be considered a solicitation or investment advice. Whether we are discussing gold futures, GLD, or GLD options these are all paper investments and they should not be viewed as a substitute for physical gold holdings. Physical gold would likely benefit the most from any supply shock in the future.

In closing, I believe that the fundamental picture for gold is improving by the day. While more downside is likely in the near-term, the longer-term picture for higher gold prices in 2014 and beyond seems quite likely.

In a world where central banks are printing fiat currency at record rates, at some point in the future physical gold prices will no longer be able to be held back from true price discovery.

To learn more about probability based option trading, consider becoming a member of www.OptionsTradingSignals.com for a totally different view of the markets and how to trade options for consistent profitability over the longer-term.