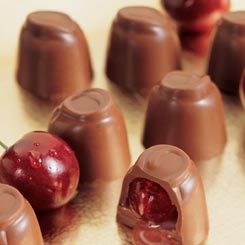 Millions of people worldwide love chocolate, but very few chocolate lovers know the beginnings of chocolate . . . where does chocolate comes from, how is chocolate made, etc.

The history of chocolate is very fascinating. Most of the world didn't know chocolate existed until Columbus went to the Americas and took the cacao bean with him back to Spain. However, it wasn't until the Conquistadors went to Mexico that the Spaniards actually discovered the wonders of the caca bean.

The Aztecs and Mayans worshipped the cacao bean and believed it was a food of the Gods. The Aztecs used it as both nourishment and currency. They believed the fruit of the cacao tree imparted wisdom and they made a special drink with it called xocolatl, of which the Aztec emperor Montezuma is said to have consumed large amounts every day.

When the Spaniards conquered the Aztecs, they were fascinated by cacao but thought the xocolatl drink was too bitter, so they added cane sugar to it and drank it hot, thus creating the first hot cocoa.

The Spanish kept their new discovery a secret from the rest of Europe for about 100 years. With the decline of Spain as a power, the secret of cacao bean leaked out at last, and the Spanish Crown's monopoly of the chocolate trade came to an end. In a few years the knowledge of it had spread through France, Italy, Germany, and England.