A new report from the nation's leading cancer organizations shows that, for the first time since the report was first issued in 1998, both incidence and death rates for all cancers combined are decreasing for both men and women, driven largely by declines in some of the most common types of cancer. The report notes that, although the decreases in overall cancer incidence and death rates are encouraging, large state and regional differences in lung cancer trends among women underscore the need to strengthen many state tobacco control programs. The findings come from the "Annual Report to the Nation on the Status of Cancer, 1975-2005, Featuring Trends in Lung Cancer, Tobacco Use and Tobacco Control", online Nov. 25, 2008, and appearing in the Dec. 2, 2008, Journal of the National Cancer Institute.

Although cancer death rates have been dropping since the publication of the first Annual Report to the Nation 10 years ago, the latest edition marks the first time the report has documented a simultaneous decline in cancer incidence, the rate at which new cancers are diagnosed, for both men and women. Based on the long-term incidence trend, rates for all cancers combined decreased 0.8 percent per year from 1999 through 2005 for both sexes combined; rates decreased 1.8 percent per year from 2001 through 2005 for men and 0.6 percent per year from 1998 through 2005 for women. The decline in both incidence and death rates for all cancers combined is due in large part to declines in the three most common cancers among men (lung, colon/rectum, and prostate) and the two most common cancers among women (breast and colon/rectum), combined with a leveling off of lung cancer death rates among women. 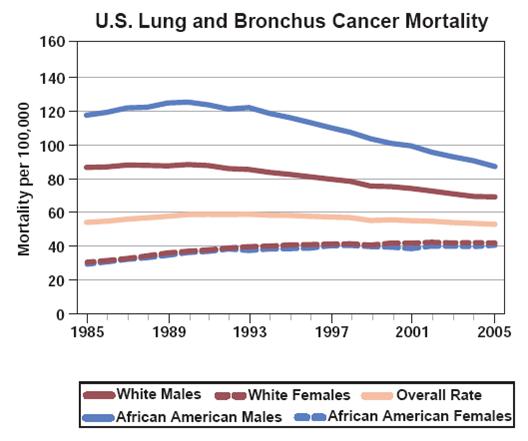 "The drop in incidence seen in this year's Annual Report is something we've been waiting to see for a long time," said Otis W. Brawley, M.D., chief medical officer of the American Cancer Society (ACS). "However, we have to be somewhat cautious about how we interpret it, because changes in incidence can be caused not only by reductions in risk factors for cancer, but also by changes in screening practices. Regardless, the continuing drop in mortality is evidence once again of real progress made against cancer, reflecting real gains in prevention, early detection, and treatment."

For women, incidence rates dropped for cancers of the breast, colon/rectum, uterus, ovary, cervix, and oral cavity but increased for cancers of the lung, thyroid, pancreas, brain/nervous system, bladder, and kidney, as well as for leukemia, non-Hodgkin lymphoma, and melanoma.

"While we have made progress in reducing the burden of cancer in this country, we must accelerate our efforts, including making a special effort to reach underserved cancer patients in the communities where they live," said National Cancer Institute (NCI) Director John Niederhuber, M.D. "This report gives us a better understanding of where we may need to redouble our efforts and try to find new ways of preventing or reducing the occurrence of kidney, liver, and other cancers that continue to show increases in both mortality and/or incidence."

The Special Feature section of the Report highlights wide variations in tobacco smoking patterns across the United States, which, coupled with differences in smoking behaviors in younger versus older populations, helps explains the delay in an expected decrease in lung cancer deaths among women and a slowing of the decrease in lung cancer deaths among men.

The report finds substantial differences in lung cancer death rate trends by state and geographic region. For example, lung cancer death rates dropped an average of 2.8 percent per year among men in California from 1996 through 2005, more than twice the drop seen in many states in the Midwest and the South. The geographic variation is even more extreme among women, for whom lung cancer death rates increased from 1996 through 2005 in 13 states and decreased only in three. The report also notes that, in five states (Pennsylvania, Illinois, Minnesota, Nebraska, and Idaho), lung cancer incidence among women showed an increasing trend, whereas the mortality trend was level.

"It's very promising to see the progress we are making in our fight against cancer," said Centers for Disease Control and Prevention (CDC) Director Julie Gerberding, M.D. "Unfortunately, tobacco use continues to plague our country, and it's the primary reason why lung cancer continues to rob too many people of a long, productive, and healthy life. We must recommit ourselves to implementing tobacco control programs that we know work if we are truly going to impact the staggering toll of tobacco on our society."

Variation in smoking prevalence among the states is influenced by several factors, including public awareness of the harms of tobacco use, social acceptance of tobacco use, local tobacco control activities, and tobacco industry promotional activities targeted in a geographic area. The 13 states where lung cancer death rates for women are on the rise have higher percentages of adult female smokers, low excise taxes, and local economies that are traditionally dependent on tobacco farming and production. In contrast, California, which was the first state to implement a comprehensive, statewide tobacco control program, was the only state in the country to show declines in both lung cancer incidence and deaths in women.

According to a U.S. Surgeon General's report, cigarette smoking accounts for approximately 30 percent of all cancer deaths, with lung cancer accounting for 80 percent of the smoking-attributable cancer deaths. Other cancers caused by smoking include cancers of the oral cavity, pharynx, larynx, esophagus, stomach, bladder, pancreas, liver, kidney, and uterine cervix and myeloid leukemia.

"We can see that, in areas of the country where smoking and tobacco use are entrenched in daily life, men and women continue to pay a price with higher incidence and death rates from many types of cancer. This type of geographic variation in smoking-related cancers is due to smoking behaviors, not regional environmental factors," said Betsy A. Kohler, M.P.H., executive director of the North American Association of Central Cancer Registries (NAACCR).

"The observed decrease in the incidence and death rates from all cancers combined in men and women overall and in nearly all racial and ethnic groups is highly encouraging," conclude the authors. "However, this must be seen as a starting point rather than a destination." They say a dual effort, combining better application of existing knowledge with ongoing research to improve prevention, early detection, and treatment will be needed to sustain and extend this progress into the future.

The study was conducted by scientists at the ACS, CDC, NCI, which is part of the National Institutes of Health, and the NAACCR.