The sell-side analysts and economists are reminding retail investors that risk assets in the United States have been on quite a tear to the upside recently. A correction now lasts a matter of days, if not hours before the bulls push equity prices even higher.

The Federal Reserve is winning the reflation war using cheap money and massive levels of liquidity to help drive risk assets higher and interest rates artificially lower. Unfortunately for domestic investors searching for yield, they find that they are forced to incur higher levels of risk in order to satisfy their growth and income needs. There are significant risks associated with higher than average fixed income returns and the cost will be felt should we see any correction in the future.

However, the Federal Reserve has a history that is littered with dismal results. The purchasing power of the U.S. Dollar has been reduced by more than 90% since the Fed’s inception in late December of 1913. Since that time, the Federal Reserve has stolen more “real” wealth from the American people than any other institution in the history of mankind.

The Federal Reserve has two primary functions. One function is to maintain price stability or in other words to moderate inflation. Clearly over the past 100 years their inflation track record has been horrific. However, the Fed’s recent track record regarding the value of the U.S. Dollar Index has been dismal the past 15 years as shown below. 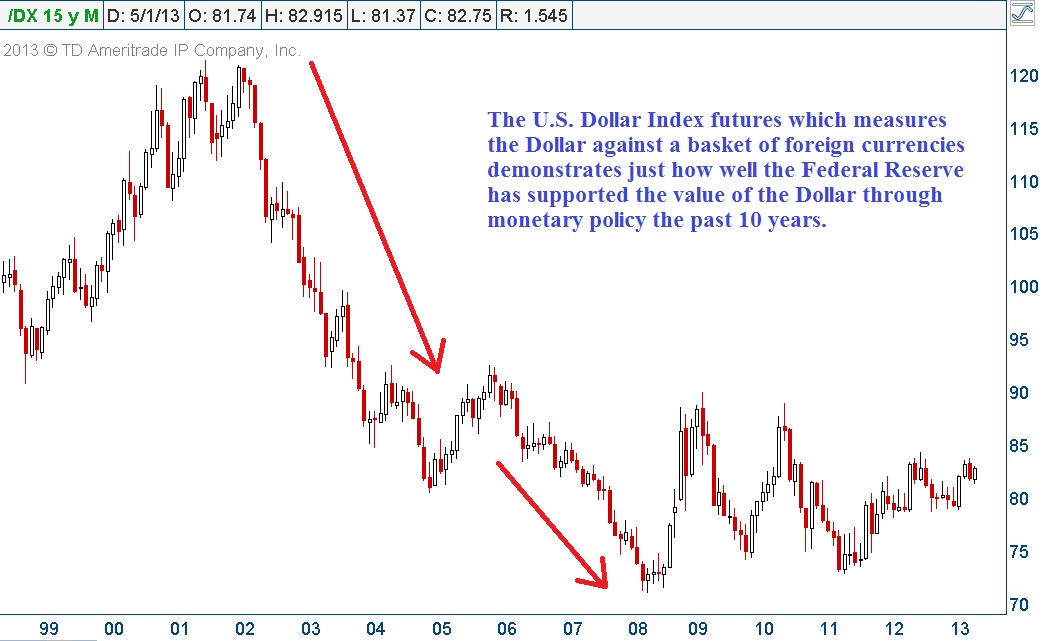 As can be seen clearly above in the Dollar Index Futures monthly chart, at present levels the Dollar’s overall value has diminished well over 31% since late 2001. I would also draw readers’ attention to the sell-off that occurred from late 2005 until the early part of 2008. The sell-off during that period of time is important to reinforce my next consideration.

Recently the flow of liquidity has primarily been seen in record low interest rates and a surging U.S. equity market. Nearly every day the Dow Jones Industrial Average or the S&P 500 Indexes make a new all-time high. The question that I would like to posit for readers is how long will it be before the so-called smart money starts looking at the attractiveness of commodities relative to equities?

If the Federal Reserve continues to print money at this pace, what will ultimately stop them dead in their tracks? The short answer is energy prices. The easiest way to stop the Fed’s printing press is to see a massive spike in energy prices. While we often hear that history does not repeat but it often rhymes, consider the price action in oil futures during the same 2006 – 2008 sell-off in the U.S. Dollar Index. 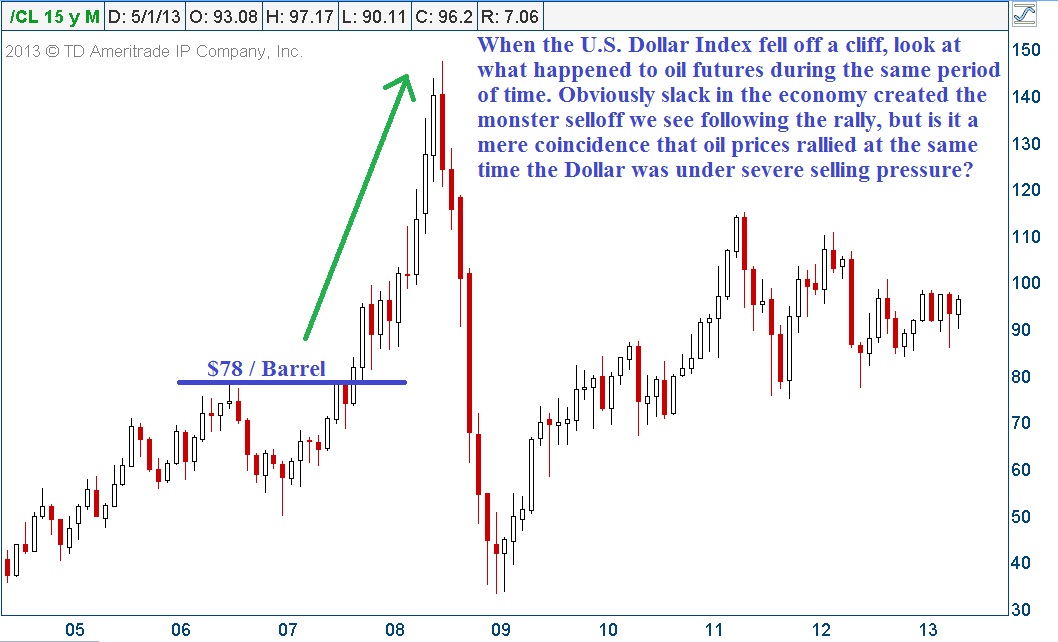 It is readily apparent that once oil futures were able to push above the $78 / barrel highs in mid- 2006, prices exploded while the U.S. Dollar came under strong selling pressure. The timing could not be more impeccable for the explosive nature in the move higher in oil.

Furthermore, if we move forward to present day price action in oil futures we have a large triangle pattern on the long-term charts. The pattern offers the inflation versus deflation argument that so many economists and strategists are plagued by presently in their analysis. 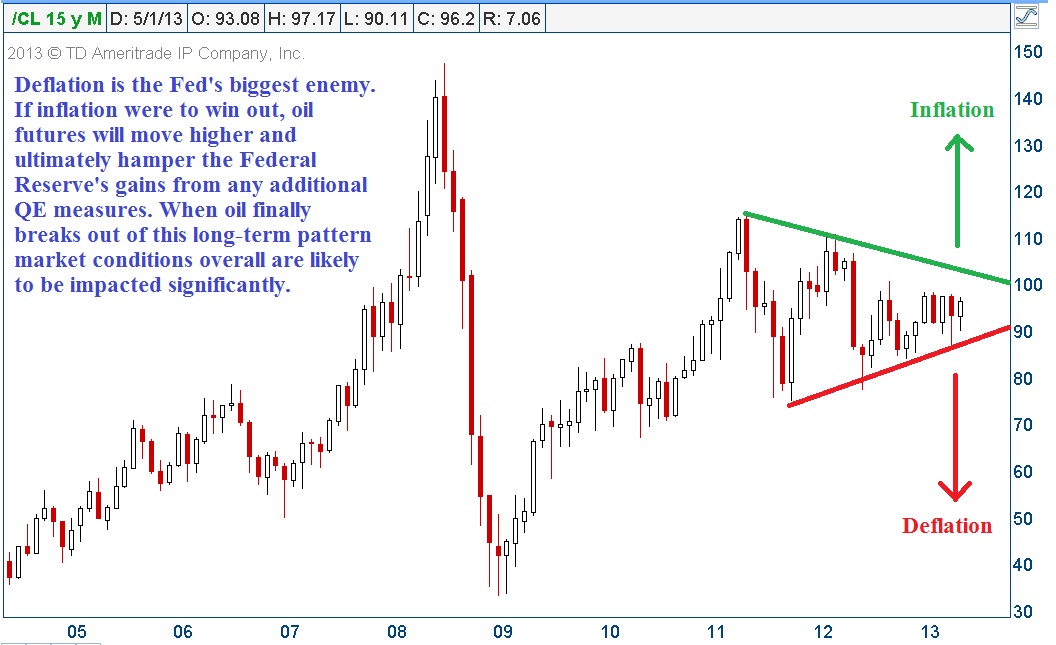 A strong rally in oil futures will ultimately put the final nail in the coffin for U.S. equity markets and the U.S. economy. Gasoline prices would obviously rocket higher and the U.S. economy would quickly be brought to its knees. The Federal Reserve would be forced to either print more money and run the risk of higher oil prices, or do nothing and run the risk that the equity sell-off could intensify.

I want to be clear that I am not calling for a rally in oil futures. Price action could go either way depending on market conditions, but the real question is regardless of which way price breaks in the future, how does it help equity markets? Those evil oil speculators run down by politicians

seeking air time on television and radio could be the final straw for Ben Bernanke and the Federal Reserve.

Whether the future is full of inflation, deflation, or stagflation I am confident that energy prices will play a critical role in price discovery for not just oil and oil distillates, but for the overall domestic economy.

If the Fed does not show constraint at the appropriate time, oil and other commodity prices are likely to remind Chairman Bernanke that the Federal Reserve’s future track record is likely to be as dire as its historical performance.