Get Ready to Trade Gold & Silver

We have been writing about the bottoming process of the Gold Bear Cycle since December 4th 2013, and our most recent article on December 26th reiterated that the best time to accumulate the Gold/Silver stocks was in the December and January window. Specifically this is what we wrote:

“These types of indicators are coming to a pivot point where Gold is testing the summer 1181 lows…at the same time, we see bottoming 5th wave patterns combining with public sentiment, bullish percent indexes, and 5 year lows in Gold stocks.  This is how bottom in Bear cycles form and you are witnessing the makings of a huge bottom between now and early February 2014 if we are right.

The time to buy Gold and Gold stocks is now during the next 4-5 weeks just as we were recommending stocks in late February 2009 with public articles that nobody paid attention to.  This is the time to start accumulating quality gold miner and also the precious metals themselves as the bear cycle winds down and the spring comes back to Gold and Silver in 2014.”

Since that article a few of our favorite stocks rallied 40-50% in just 3 weeks or so from the December time frame of our article. A recent pullback is pretty normal as we set up for Gold to take out the 1271 spot pricing area and run to the mid 1300’s over the next several weeks. By that time, you will be kicking yourself for not being long either the metals themselves or the higher beta stock plays.

A few suggestions that we have already written about we will reiterate here again. Aggressive investors can look at UGLD ETF, which is a 3x long Gold product that will give you upside leverage as Gold moves into Cycle 3 up. Other more aggressive plays we already recommend a lot lower include GLDX, JNUG, NUGT and others. Picking individual stocks can be even better and we have recommended a few to our subscribers that are already doing very well.

What will trigger this next rally up is sentiment shifts to favor Gold and Silver over currency alternatives. The precious metals move on sentiment, much more so than interest rates or GDP reports or anything else in our opinion. Sentiment remains neutral to bearish as evidenced by the larger brokerage houses running around in January telling everyone to sell Gold, so we see that as a buy signal on top of our other indicators. 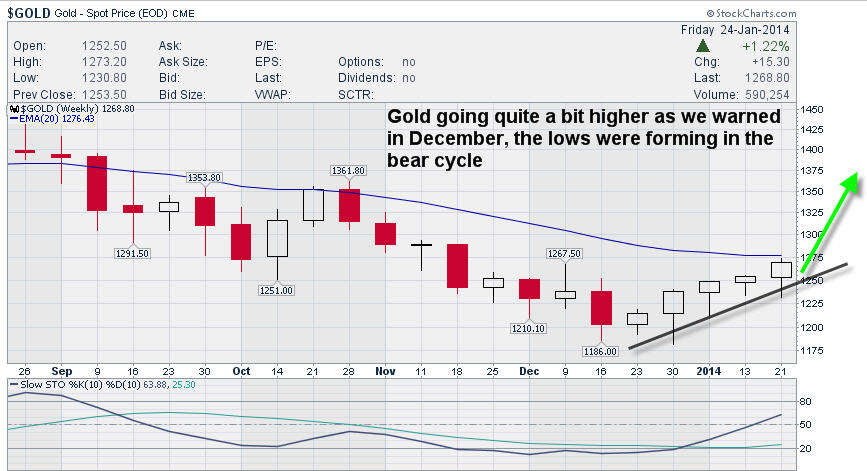 We expect the mid 1500’s by sometime this summer, but by then your opportunity will be long in the rearview mirror. Join us for frequent updates at www.MarketTrendForecast.com