They may not be ditching the lotus position, but women - from hip urbanites to cancer survivors - are discovering the calming benefits of needle work. 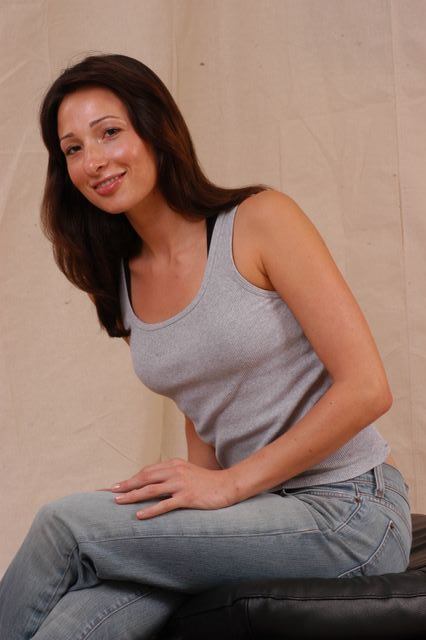 Every Friday, a group of women who work at Oxford University Press in New York City slip away from their computers, blow off their lunch breaks, and take over an empty office. Lissy Blomster, a 25-year-old art buyer and the motivating spirit behind this group, pushes aside an abandoned stack of papers to perch on a desk, swinging her black-stockinged feet. The other women fan around her in a circle of hastily assembled chairs, spilling soft, luminous balls of yarn around their ankles: loopy mauve, canary yellow, forest green, blood red.

The clamor of knitting needles sets in, and slowly, the knots of the week unravel. The women lean over to gossip about 24-year-old Phebe Szatmari's boyfriend, swap stitching suggestions, or fondle works-in-progress: scarves, sweaters, socks. "I can tell when I'm stressed because my stitches are always tighter," says photo researcher Donatella Accardi, 34. "But by the time I get back to my desk, I'm totally relaxed."

Once considered an activity for seniors or back-to-the-earth types, knitting has become, in America, what some folks are calling "the new yoga": the latest way to relax. Professional women say it burns off anxiety and makes them more clear-headed at work; cancer patients and others grappling with serious illnesses find that it helps them to cope with their situations. Even Hollywood stars such as Julia Roberts and Cameron Diaz are getting into the stitch, picking up needles to pass downtime on movie sets. And perhaps most importantly, according to those who are caught up in the craze, knitting threads together women of all backgrounds and generations in groups that provide the kind of support they just can't get on their daily social rounds.

Like the Oxford gals, the new generation of knitters is young, urban, and sophisticated. According to Research Incorporated, a marketing research firm in Atlanta, the number of knitters younger than 35 doubled between 1998 and 2000 (the most recent data available) to an estimated 4 million. Approximately 38 million American women - one in four - know how to knit or crochet.

For many, knitting is the comfort food or craft. The art's calming effects come from the repetitive rhythms of needles, yarn, and hands, explains Bernadette Murphy, a California based author who has researched knitting for her book Zen and the Art of Knitting. She says it induces the classic "relaxation response," marked by a lowered heart rate and blood pressure. This response was identified in the mid-1980s by Herbert Benson, M.D., president of the Harvard Mind/Body Medical Institute.

While Benson has not studied knitting specifically, he agrees that it could evoke a powerful physical effect. "Any kind of repetitive activity, whether it's reciting the rosary or knitting, can induce a meditative state in the brain," Benson says. Unlike ordinary rest, meditation increases mental alertness and relaxation, increasing mental well-being.

"When I knit, I lose all track of time," says Accardi, echoing the sentiments of many other women who report a kind of knitter's high. The same kind of mental buzz might happen when you're reading a good book, Szatmari adds. "But when you're knitting, your thoughts are your book," she says. "Your mind meanders along and brings you to whatever you need to be thinking about." Blomster agrees: "Knitting helps me shift gears, clear my head, and start fresh."

This ability to lose oneself - as well as find oneself - in the knit-one-purl-two rhythm helps explain why this craft has such appeal for people with serious illnesses. "I have always been a passionate knitter, but the more my life unraveled, the more I knitted," says Tanya Parieaux, 55, a breast-cancer survivor. "I felt like I was dying inside, but every time I picked up my knitting needles, I was moving forward and creating life. It brought me hope." Parieaux's belief in the healing power of knitting inspired her to form Threads of Life, a volunteer group that teaches knitting to patients in several Seattle area hospitals.

"It's pretty wonderful to see people who are so very ill suddenly forget themselves and just break out laughing," Parieaux says. For cancer patients in particular, knitting can be a healing art. The repetitive action of knitting helps to relieve emotional stress, which can reduce the body's ability to tolerate chemotherapy and magnify unpleasant side effects, such as nausea, says Julie Gralow, M.D., a breast-cancer specialist at the University of Washington Medical Center in Seattle and sponsor of Parieaux's knitting program.

Knitting as a social activity confers benefits that go beyond mental and physical relaxation. Traditionally, knitters stitched alone, but the new trend seems to be going toward knitting in groups, according to the Knitting Guild of America, an Ohio-based out-fit that organizes knitting circles across the United States. These circles have become kind of casual group-therapy sessions, replacing the typical tangle of modern communication - unwieldy masses of telephone, fax, and personal-computer cords - with skeins of yarn. Therefore, knitters are looping into the proven power of support groups to relieve anxiety and depression and create positive medical outcomes, Gralow says.

Crafting in groups allows even people reluctant to spill their guts in a traditional therapeutic setting a safe circle in which to share their woes and listen to advice. "It's easier to be revealing when you have something to do with your hands," Murphy says.

For the Oxford circle members, knitting together is equal parts stitch-and-bitch and back-to-the future, enabling them to connect not just to each other, but to generations of knitters past. "In the `70s, a lot of people considered the domestic arts anti-feminist, and you wouldn't be caught dead knitting," says 43-year-old art buyer Andrea Suffredini, a mother of four and one of the oldest members of the Oxford circle. "But as my mother gets older, I'm feeling sentimental about passing along these family traditions to my kids, including the boys," she says.

These days, she finds herself knitting quietly with her mother during family gatherings. "Even when we're not getting along, knitting in silence helps us bridge that generation gap," Suffredini says. Finding comfort in stressful times, renewing ties with friends and family, creating handmade treasures to pass on to loved ones - these are the threads that weave together knitting's past, present, and future.

You don't have to learn fancy handiwork or invest in expensive needles to get started. Here's how you can get into the stitch. Visit your local yarn shop. Employees can guide you to what you need. Beginners are recommended wool or acrylic yarns and size-8 needles.

Start with the basics. Anyone who knows how to knit can teach you the basic knit-and-purl technique. Hone your skills on the easiest project - a scarf.

Join a knitting circle. In local trains in Mumbai, groups of women huddle together to exchange notes and knit. These sessions help melt away the tedium of commuting and the stresses of the day, even as they make productive use of the hours spent in traveling. If the commuting scene doesn't work for you, gather like-minded women in your office/neighborhood and start your own group.

Get inspired. For intermediate knitters, books with lush illustrations can inspire ideas.