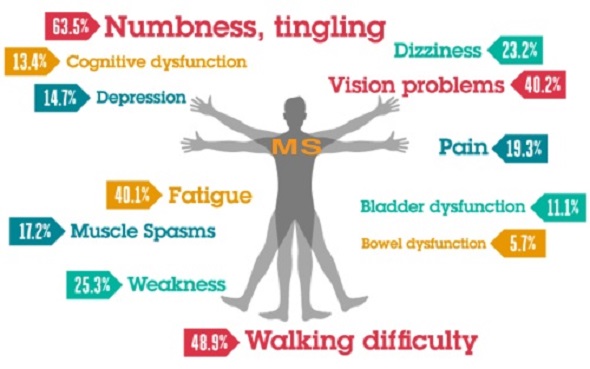 An unpredictable disease of the central nervous system, multiple sclerosis (MS) can range from relatively benign to somewhat disabling to devastating, as communication between the brain and other parts of the body is disrupted.  Many investigators believe MS to be an autoimmune disease -- one in which the body, through its immune system, launches a defensive attack against its own tissues. In the case of MS, it is the nerve-insulating myelin that comes under assault. Such assaults may be linked to an unknown environmental trigger, perhaps a virus.

Most people with MS also exhibit paresthesias, transitory abnormal sensory feelings such as numbness, prickling, or "pins and needles" sensations.  Some may also experience pain.  Speech impediments, tremors, and dizziness are other frequent complaints. Occasionally, people with MS have hearing loss.

Beta interferon has been shown to reduce the number of exacerbations and may slow the progression of physical disability. When attacks do occur, they tend to be shorter and less severe.  The FDA also has approved a synthetic form of myelin basic protein, called copolymer I (Copaxone), for the treatment of relapsing-remitting MS. Copolymer I has few side effects, and studies indicate that the agent can reduce the relapse rate by almost one third.

One monoclonal antibody, natalizumab (Tysabri), was shown in clinical trials to significantly reduce the frequency of attacks in people with relapsing forms of MS and was approved for marketing by the U.S. Food and Drug Administration (FDA) in 2004.  However, in 2005 the drug’s manufacturer voluntarily suspended marketing of the drug after several reports of significant adverse events.  In 2006, the FDA again approved sale of the drug for MS but under strict treatment guidelines involving infusion centers where patients can be monitored by specially trained physicians.

While steroids do not affect the course of MS over time, they can reduce the duration and severity of attacks in some patients.  Spasticity, which can occur either as a sustained stiffness caused by increased muscle tone or as spasms that come and go, is usually treated with muscle relaxants and tranquilizers such as baclofen, tizanidine, diazepam, clonazepam, and dantrolene.

A physician may diagnose MS in some patients soon after the onset of the illness. In others, however, doctors may not be able to readily identify the cause of the symptoms, leading to years of uncertainty and multiple diagnoses punctuated by baffling symptoms that mysteriously wax and wane.  The vast majority of patients are mildly affected, but in the worst cases, MS can render a person unable to write, speak, or walk.  MS is a disease with a natural tendency to remit spontaneously, for which there is no universally effective treatment.

The National Institute of Neurological Disorders and Stroke (NINDS) and other institutes of the National Institutes of Health (NIH) conduct research in laboratories at the NIH and also support additional research through grants to major medical institutions across the country.  Scientists continue their extensive efforts to create new and better therapies for MS.

One of the most promising MS research areas involves naturally occurring antiviral proteins known as interferons. Beta interferon has been shown to reduce the number of exacerbations and may slow the progression of physical disability. When attacks do occur, they tend to be shorter and less severe.  In addition, there are a number of treatments under investigation that may curtail attacks or improve function.